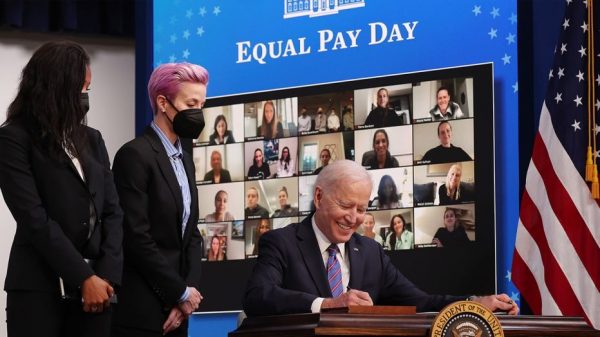 President Biden’s train wreck of a press conference last week overshadowed an equally disturbing event the day before. We would be wise not to forget the words he used on that day.

March 24 was Equal Pay Day, a day that means absolutely nothing to the vast majority of Americans who are too savvy to fall for bogus narratives about the pay gap like the ones Biden made in his remarks to commemorate this divisive and pointless event.

“The reality is that in nearly every job — more than 90 percent of the occupations — women still earn less than men: 82 cents on the dollar on average.”

“There’s a lot to do,” he added, “but together we can ensure that our daughters have all the same rights and opportunities as our sons.  And if we’re able to do this, it’ll be transformational for our nation. That’s the goal. That’s what this is all about.”

One has to wonder on which planet President Biden is living. It can’t be planet America, where the absurd argument that the pay gap is a result of systemic oppression has been debunked again and again. The eighty-two cents mantra (which, for the record, was seventy-seven cents just a few years ago, indicating a massive rise in women’s earnings) is a phony figure because it has no relation to how much work is performed or what type of work is done.

Does Biden even know about the The Equal Pay Act of 1963, which abolished wage disparity based on sex? One has to wonder after his performance at the press conference, where he required an array of cheat sheets to get through the hour and at one point was completely incoherent.

Stating that women in America earn less than men, without explaining why, either shows a marked ignorance on the president’s part or demonstrates his willingness to lie to the American people. I don’t know which is worse. Moreover, girls in America are hardly lacking when it comes to equal opportunities. On the contrary, they’ve been so coddled and cared for they’re now outshining our sons in every conceivable way.

Stating that women in America earn less than men, without explaining why, either shows a marked ignorance on the president’s part or demonstrates his willingness to lie to the American people. I don’t know which is worse. Click To Tweet

But of all the outlandish things Biden said on March 24, it’s the one below Americans can’t afford to forget, as it will be the overarching theme of this administration for the next four years:

“You know , I’ve told my daughters, granddaughters from the time they got old enough to understand what I was saying — and I mean it: There’s not a single thing a man can do that a woman can’t do as well or better. Not a single thing.”

This ‘up-with-women, down-with-men’ narrative, the one feminists created and their empty-headed followers repeat, has been the single greatest tragedy of modern America. It is the reason families are falling apart at the seams and will continue to as long as Joe’s in the Oval Office.

Millions of men have stopped trying to succeed—because what the hell for? no one needs them—and modern women are mired in resentment. “So much extra weight of caregiving and responsibility is falling on [women’s] shoulders,” Biden said. “It causes women to miss work, cut hours, and leave their jobs and care for their children and aging loved ones. That in and of itself sows some discrimination.”

This is the quintessential feminist tenet that suggests women in America must constantly fend off the conspiracy of male chauvinist pigs in their midst. Not only is this an untenable attitude for love and family life, it has a way of making women perpetually miserable. Who can possibly be happy when half the human race in purportedly conspiring against you?

Not to worry, Biden says. Men may be useless, but I’m here now to give you everything men don’t. Together we will create a new world.